The parallel between PEEL Magazine and win > < win

Last July I visited Garage Museum for Contemporary Art in Moscow for the exhibition The Coming World: Ecology as the new politics. The overarching theme focussed on the future we are already living in, filled with uncertainty and ecological challenges. A present future where we are actively shaping what comes next through our current actions.

What struck me most was the immersive installation win > < win by Rimini Protokoll. The soft political message, conveyed in a dreamy, digital work of art reminded me of PEEL Magazine in many ways. When it comes to aesthetics, the transparency of the screen that transformed into an almost otherworldly, science fiction like aquarium, reminded me of the transparent materials used in the PEEL Magazine photoshoot. But when diving into it a little deeper, there’s a message on ecology in both works of art. The thin lines between soft politics and a pure aesthetic experience become quite vague, I’d say transparent too. Perhaps, they’re a hybrid of both aesthetics and activism.

As the apocalypse of our ecosystem is approaching, the only species that will survive are the jellyfish.

The message in win > < win is quite a striking one. Nowadays we’re swimming in oceans of plastic, oil and information. The win > < win immersive installation is like a blind date with the future and the role you’re already playing in it, shown through a mirror like videoscreen. At the core of the installation is the ultimate blind spot of our media and eco awareness politics: jellyfish, living and multiplying forever. The installation confronts us with the species that will outlive us. As the apocalypse of our ecosystem is approaching, the only species that will survive are the jellyfish.

“We are in this crazy, unforeseen and incomprehensible situation where we are competing against jellyfish. And they are winning,” says the Australian marine biologist and jellyfish expert Lisa-Ann Gershwin. Oceans getting warmer, are a disaster for natural species, apart from jellyfish whose breeding season gets extended because of it. And what about this summer. Did you go swimming in the sea or the ocean? How many jellyfish did you spot? I went swimming in the Hague one day and encountered about five in one afternoon. And there’s a reason why.

Because the earth and water are getting warmer, they are multiplying like never before. On top of that, the more underwater species die from plastic and oil in the ocean, the less predators jellyfish have. The result? They can endlessly multiply and live forever, without getting killed.

Rimini Protokoll reversed the perspective and staged the jellyfish gazing back at the spectators. So from all the political messages and eco-warnings, you notice that we can no longer ignore the effects of a changing and apocalyptical ecosystem. We can no longer distance ourselves from ecology or see them from an us-versus-them perspective. The truth about ecology is now a player in our works of art as well. We can no longer watch and observe how it’s falling apart; it’s becoming part of us, just like the jellyfish. This is why I see a close parallel with PEEL Magazine, where actors of different artistic disciplines are coming together, blending perceptions and materials. Secondly, materials are playing an important role now too. They’re not just objects anymore, but prominent subjects emerging in the art world. Softly playing around with the idea of authenticity, recycling and giving presence to textures, fabrics, materials and plastic.  That’s what Peel is about from my perspective.

In PEEL Magazine, the transparent lines between between soft politics and eco-aesthetics feel like they’re altogether part of a new wave of eco-art we’re slowly diving into.

Just like the jellyfish in Rimini Protokoll’s work of art – cute, dreamy and the ultimate sign of an apocalyptical ecology – PEEL Magazine shows futuristic images where natural and unnatural materials become one. Aspiring artists creating a surreal perspective of the world.

So, should we merely read political messages in art, whilst still distancing ourselves from nature and its ecological changes? Or should we stay close, and incorporate the ecological changes and materials as part of the art? In Peel Magazine, the transparent lines between between soft politics and eco-aesthetics feel like they’re altogether part of a new wave of eco-art we’re slowly diving into. 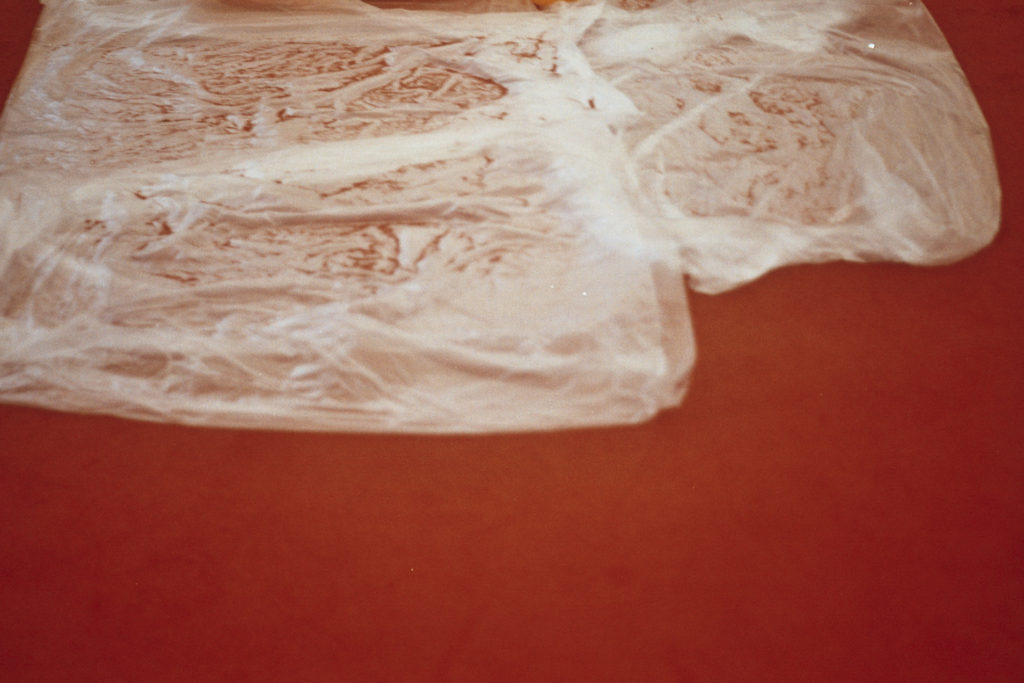